I love being Jewish. I love the Jewish traditions, like having a Bar Mitzvah,
spending time with family during the Jewish holidays, and eating bagels. My bar mitzvah helped me become a man by learning about Jewish politicians in my area. Since I was 9 years old I have gone to a Jewish
Camp called Camp Tamarack. My favorite time at camp is on Saturday at
sundown. The ceremony is called Havdalah. It is when we end Shabbat by singing, lighting candles and smelling the spices like cloves, cinnamon or bay leaves. We wish for a good week. 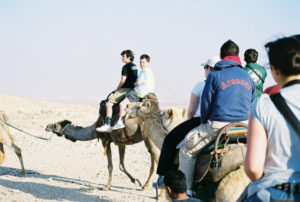 When I was in my second year of being at Oakland University, the Jewish
organization Hillel had a table telling people about a ten-day trip to Israel for college students between the ages of 18 and 26 who are Jewish. I signed up to go because I thought it would be fun. When I was 16 years old, I went to Israel once with my family but I wanted to go with friends and kids my own age. After I signed up, I called my mom and said, “Hi Mom, I signed up to go to Israel in May!” I was happy to tell her. She gulped but sounded happy for me.

I had to go through an interviewing process to be selected. They asked me
questions and I knew I could answer them because I know about myself and my Jewish life.

Before the trip, we went to an orientation and a slide show about the trip to Israel. I learned about Taglit – Birthright Israel which is the group that sponsors and funds the trip. They want young adults to visit Israel and know about their heritage and history. When I was watching the slide show I thought, “WOW! I will be there soon. Send me to Israel right now! I am ready!” I was looking forward to meeting new friends, seeing the country, and learning about the Jewish culture.

At the orientation I took some names and phone numbers of other guys going on the trip. My dad and I had coffee with Andrew one of people going to Israel so that I could get to know him better. We talked about the trip. We planned to take the same plane to LaGuardia airport in NewYork and then my cousin, Bobby would drive us to the Kennedy Airport. We flew from Kennedy to Israel. I told Andrew that I couldn’t read but I have lots of sight words. I wanted him to know how he could help me if I needed help.

To get ready, I had to order a cell phone that I could use in Israel and get my passport renewed at the post office. I bought a cool pouch that I could wear around my neck to hold my pass port. I called my Uncle Harvey and he sent me some cool sun glasses for the trip. I packed clothes and other stuff. 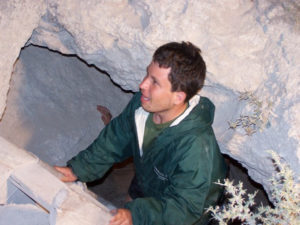 A couple of days before we left for Israel, I met with one of the Hillel staff, Jake who was going on the trip with me and would be the staff for my Bus 516. It was cool to meet him and he was friendly. He said that if I needed any help, I could ask him. He seemed calm and relaxed and said that it would be one of the best trips of my life. He asked if me if I wanted him to say anything about my disability to the group. I liked that he asked me that. I told him that I didn’t think he would have to tell them but I would let him know if I wanted this. It was a good idea to talk with him because it got me ready for the trip. I felt safe and I knew that I could talk with him if I needed to.

On the day of going to the airport I felt happy and scared. I was happy to have a great time and scared that something might happen to me. When I felt scared I listened to the CD of music that my sister and my friends made for me. It calmed me down and reminded me of my family.

My parents drove me to the Detroit airport. We were quiet. It was nice to drive together, just the three of us. I hugged my mom good bye. I was getting more excited about my trip. While my dad and I were walking to the gate, we saw Andrew. We had some time and went to get coffee. I heard someone call out: “Hey Micah, how ya doing?” It was my friend, C.J. who I hadn’t seen in a long time. We found out that he was going on the same trip to Israel with me. I liked that. I felt more safe going with someone I knew.

We arrived in Israel on Sunday. It as a long plane ride but we had good food, like hummus and chicken. We were so busy that I didn’t call my parents for a few days. We hiked up big hills to the Arbell Cliff in the Kinneret Valley. We saw candle making in Safed. We went on a nature walk and say the Old City of Jerusalem.

On Wednesday I called my dad at work. I said that I rafted on the Jordon River and that I was having an excellent time. My dad, said, “Oh wow. Thank you for calling.” I was proud to tell him that I rafted down the river. I told my dad that Lori, a friend and staff member of Hillel helped me go on the raft trip. She told me it was like floating in a bath tub. She gave me the confidence to try it. She said that I helped her on the trip too and that we were buddies together.

I did more things after that. I rode on a camel. I visited old synagogues and a  shoe factory. One of my favorite places was visiting the grave of Yitzhak Rabin. He was a Prime Minister of Israel and worked hard to bring peace to Israel and Palestine. I walked up and down Masada. It was a long hike.

On my trip, I learned so much about Israel history and culture. I learned that during Shabbat most everything is closed in Israel. It is so quiet and relaxing during Shabbat. I liked having a calm Saturday and not being so busy. In the United States, we should relax one day every week and not do so much stuff. 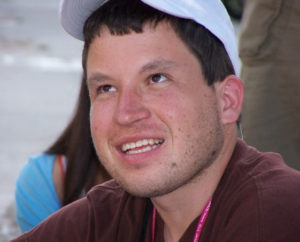 Now I have some cool new friends from the trip and we have been hanging out. Some people put pictures of me in Israel on my Face Book. You can see me hiking and doing other things. I learned that I could try new things, like raft on a river and hike big mountains and travel outside of my country even when I didn’t know anyone. I took a risk to try something new. I tried it and I liked it.

(Here’s how I wrote this article. I dictated what I wanted to say and my mother wrote my words. Sometimes she would ask me questions that helped me think about things that I didn’t think about but were in my head.
Sometimes I would google for more information. For example, I forgot what spices were used in the Havdalah ceremony. I googled “havdalah” and then used a soft ware program, Screen Reader to read the information. When I heard that the spices were cinnamon and cloves, I “cut and pasted” the words to my article. When I wanted to hear what I wrote, my Screen Reader would read what I wrote so far and then I could think about what else I wanted to add.)