Micah’s Story: Through the Same Door

Micah’s journey from segregation to inclusion required him to open a lot of doors for himself, some of which were never opened before for a student with a disability. Learn about Micah’s story, and how you can open those same doors for yourself, your children, or your students to help them be more fully included and refine norms.

#1: The Door to Being Included in School 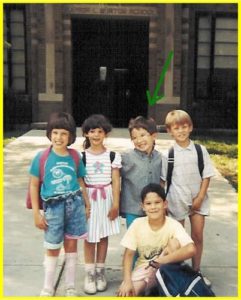 Micah with friends in Elementary School

I came home one day in first grade and I told my parents I wanted to go through the same door as all of the other students at a school. As a student with a disability, the school had me a different door every morning to special education classes. I told my parents I wanted to be with my friends and peers. My parents advocated to make sure that I was included in school and they worked with my teachers and the school to make sure I had an inclusive experience in school all the way to high school graduation. Because of this, I’ve been included my entire life.

I was included in school with taking regular classes, participated in running cross country and having a Circle of Friends.

Born in the 1980s, Micah is a member of the “ADA Generation.” The Father of the ADA, Tom Harkin, first coined the term “ADA Generation” to refer to the first generation to grow up with the Americans with Disabilities Act. As we aim to create a more inclusive community, this generation is able to as the question: “What Does it Mean to Be a Human Being?” 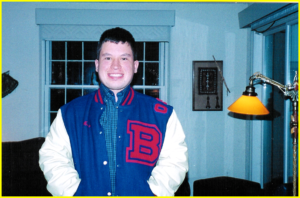 #2: The Door to Oakland University 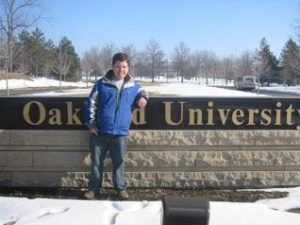 I attended Oakland University in the OPTIONS Program. It was a great experience to attend a university. At Oakland University, I took many exciting classes, made life-long friends and was part of a fraternity, Alpha Phi Omega.

In 2003, Micah began “sitting in” on regular classes at Oakland University in Rochester, Michigan through a transition program sponsored by a local school district. During the next few years, Micah took two buses to the campus each day, attended classes, actively participated in student organizations and extracurricular activities, volunteered on campus, and was known as a “OU student”. In 2007, the university initiated a new program called OPTIONS which allowed Micah, and other students with intellectual disabilities to continue learning as students at OU. The program required full tuition for classes, while maintaining a full course load.

For 2 years while attending Oakland University, many of my friends and I fought for my right to stay in the on-campus dorm. On December 23, 2009 Honorable Judge Duggun ruled that I had a legal right to move into the dorm.

In 2007, Micah applied to move into the dorm and his application was accepted. He was given a move-in date and paid the initial deposit to hold the room. Within a few weeks, he received notification that he could not live in the dorm because of “university policy.” The administration argued that he was not considered a “degree-seeking” student. Micah presented his case to the Vice President of Student Affairs, the Board of Trustees, and his classmates and teachers. OU’s Student Congress, OU faculty, staff, and students who wrote letters, signed petitions, held rallies, testified on Micah’s behalf. 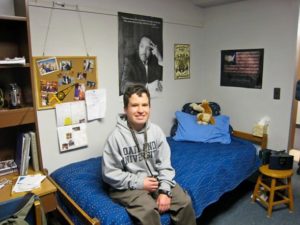 Micah sitting in his dorm room at Oakland University

Micah eventually joined forces with Michigan Protection and Advocacy Services, Inc. to sue Oakland University for violating his rights. After several depositions and hearings, the Honorable Judge Duggan of the U.S. 6th District Court ruled on December 23, 2009 that OU had denied Micah housing based on “prejudice, stereotypes and/or unfounded fear of persons with disabilities.”

On January 4, 2010, Micah moved into the dorm with the support of students, his family, and friends—and with the media near by recounting his story to the nation. Micah’s favorite quote has always been “A community that excludes even one member is not a community at all” by Dan Wilkins. Micah values his community for many reasons, particularly because they supported him and recognized that—Micah is a student!

I have learned that it is hard to fight battles for justice and inclusion. I also learned that when we create community we can change the world. This struggle will help many other people in colleges across the country. I hope that other students with disabilities continue to dream big and fight for what they believe in.

More on Micah’s fight to live in the dorm:

#4: The Door to Syracuse University 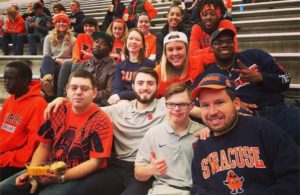 Micah and friends at a Syracuse basketball game

I always knew that Syracuse University had a long and rich history of disability culture and that they trained their K-12 teachers to work respectfully with ALL children. After speaking at two big conferences last August 2011 at Syracuse University sponsored by the School of Education, I just loved being at a place that really “got” inclusion and disability. I really felt at home.

After the close of the two conferences, I returned to Michigan where I have been living for my entire life. I was determined to make Syracuse my new home and I wanted it to happen by January. Many people wondered if I could make that dream happen in just six months. I couldn’t think about IF I could make it happen, I could only think about HOW I could make that happen. Over the next six months, we had several conference calls and Skype calls to discuss how we can work together. I knew I had to build my circle of support right away.

I arrived in Syracuse on January, and have been working at SU as a graduate assistant. I help teach a class in the School of Education. Part of my employment includes working with a program called Peer-to-Peer, which links college students with other college students with disabilities. I am also helping with a campaign called “I Am Norm” at Liverpool High School and am part of a disability rights group, Beyond Compliance Coordinating Committee, and a sign language club, both at SU. I have lots of people that are helping me since moving here.

Over the years, I have opened many doors with the help of many people. It all started when I told my parents that I wanted to go in the same door at school as my friends in second grade. Opening this newest door in Syracuse happened in just six months. Not only do I feel at home, now I am at home, my new home in Syracuse. 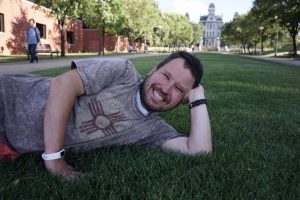 Micah in front of the Hall of Languages at Syracuse

I earned a certificate in Disability Studies from Syracuse University in 2015. I currently live in Syracuse N.Y. where I co-teach classes in inclusive education and disability studies. As a teacher’s assistant at Syracuse University, I teach future educators about inclusion and about how students and others should be included in school, employment and their community.

(excerpt from “I Know the Next Door I Want to Open”, Onondaga Community Living Reflections Newsletter, Syracuse, NY. Summer 2012)